Whenever my Scottish family or my ‘adopted’ Danish family get together, all the old funny stories come out.  Nothing like a good laugh to get rid of the blahs!  One of my favourite stories involves my DDDMIL (Dearly-Departed-Danish-Mother-in-Law) who – like my DDH (Dear Danish Husband) – could be, let’s say, a trifle ‘distracted’ at times.

One morning, many many moons ago, she walked into Viborg town centre, together with my DDH (who back then was just a babe in arms – or, in this story, was just a babe safely bundled up in his pram).

She did her shopping, chatted to a few friends she met in town (as you do in small towns) and, as lunchtime approached, she headed back home.

Got home, unpacked her shopping and suddenly had a nagging thought that, hmm, she had forgotten something…  What was it?  Yep, you guessed.  She had left my DDH in his pram outside a shop! Of course, she went straight back for him.  He was still there, sound asleep, no harm done.  This is Denmark after all! 😛  [You know you’re in Denmark when…Baby comes too!]

I thought of my DDDMIL and that story when I spied this ‘Gratis Hundeparkering‘ (‘Free Dog Parking’) box outside a supermarket this morning.

If you put your dog (or child?!) in it, just remember (as they always say on the underground trains here) to make sure to “take your belongings with you when you leave”…

Have a fabulous Friday and a wonderful weekend!

Which got me thinking the other day.  How do you know when there are Danish kids in your house?  A pile of shoes or boots at the front door!

Or…  You can’t get into your garden for bikes, helmets and rucksacks!

My own two (half Danish/half Scottish) little ‘uns have had a tough day today.  I’m off to give them a cuddle.  And tell them a few (bad) jokes.

You know you’re in Denmark when…

It’s 10 am.  And there they are, a crocodile of Danish nursery kids.  You’ll usually see them in ‘troops’ of 20 kids and 3 teachers.

Yep, they’re out and about.  Whatever the season, whatever the weather (“You know when you’re in Denmark when…(No such thing as bad weather!)”)

Crocodiles of small Danish kids are a common sight.  What day is it?  It’s “tur dag” – ‘daytrip day’!

Most nurseries and kindergartens have set days for set activities, for example:

“Tur dag” is the day when the kids go on a trip.  Either to a museum, a nearby playground or even just a walk around the neighbourhood.  You know kids – a five minute walk soon turns into a thirty minute expedition when you stop to look with awe and wonder at every single snail, conker and (red Danish) squirrel that you meet along the way! 🙂

And what’s that at the back of the crocodile?  The ubiquitous Danish wooden wagon to hold the “turtasker” (“day trip rucksacks”)… 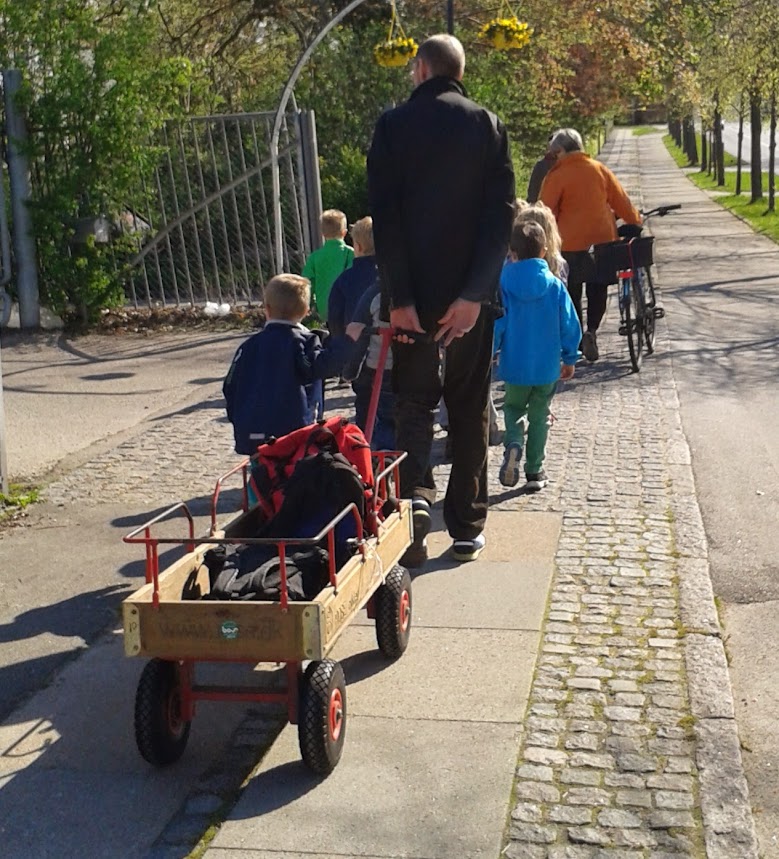 Have a fabulous Friday and a wonderful weekend – wherever you end up!

Can’t find anything decent to watch at 8pm?  Then you might want to tune in to one of the more bizarre sights on Danish children’s tv.  People in bed.  Sleeping. 😉

At the top of the screen there’s a live ticker, telling you how many hours it’ll be before they wake up again.  “Vi vågner om 7 timer og 53 minutter”. We’ll be awake in 7 hours and 53 minutes.  Highly addictive stuff!

The point of the programme?  Well, it’s not actually a programme as such.  At 8pm, the Ramasjang channelstops normal emissions and starts broadcasting footage of the kids’ tv presenters and characters sleeping because, well, you know, it’s that time of day when all tiny Danes really should be safely tucked up in bed.  So when little Frederik or Amalie start to protest, you can say, “Hey, get a move on!  Sigurd has his pjs on and is already fast asleep!” 😉

It’s a very soothing sight.  A clock ticks in the background.  Snores and contented sighs can be heard.  A guinea pig squeaks softly.  But, as you would expect from those crazy Danes, there’s also a bit of warped humour.  Um, what’s that strange noise?  Someone with a bad case of wind?! But then the camera zooms in and you can see that – selvfølgelig – it’s only someone playing an instrument in their sleep.

My personal favourite is Herr Skæg (“Mr Beard/Fun”).  In addition to his very, very, very long beard that goes down to his knees (yep, it’s real, I’ve seen him around town), he also has long legs that…

…stick right out the end of the bed.

As Mrs Meers from Thoroughly Modern Millie would say, “Everybody should be in bed by now!”  Goodnight!  And sov godt!

This that and everything!