We’re now recovered from the 24 Days of Danish Christmas (if you missed that, you can start here with 1 December) and yesterday afternoon I looked out my DDH’s (Dear Danish Husband’s) black tie outfit.  And safety glasses.  And he came home from shopping with several bags of explosives…  Is my DDH the Danish equivalent of James Bond?

Nope, it’s because tonight we will be celebrating Nytår (New Year).  Which, in Denmark, is serious business.  While Christmas is spent with family, New Year’s Eve is normally spent with friends. Though there are organised parties in bars and clubs, most Danes celebrate at someone’s house.

Let’s start with the basics.  The celebrations start at 6 o’clock.  Sharp.  So make absolutely sure you are at the party venue about 15 minutes before, so you have time to change out of your ‘outside’ shoes, take off your coat, scarf and gloves, and put down your (humungous) bag of fireworks (not forgetting the all-important safety glasses for every member of your party). And what’s so important about 6 o’clock?  Well, that’s when the Danish Queen “Daisy”‘ makes her speech, live, on the telly. Two minutes to six – eeeeeek – everyone stand to atten-SHUN!

It’s tradition to watch and listen. Whilst standing up (only the elderly and small tots are exempt) and enjoying a cocktail or glass of bubbly. Now, when you get tired of standing up in your party heels, and start to wonder “when will this ever end?”, just listen out for a mention of those at sea.  Or the Danish armed forces. Or Greenland. You are in the final straight!

The Queen always finishes with “Gud bevare Danmark!” God Bless Denmark! At which point, the kids and big kids (= dads) are officially allowed to go outside and launch a few fireworks. (But remember to keep those big guns for 12 o’clock!)

And it’s also the cue for the others (um, that would be the women?!) to go into the kitchen, finish prepping the yummy food, and get the starter on the table. Then the menfolk/kids come back in, everyone eats, the menfolk/kids go out and launch a few more fireworks, the women clear up and prepare the next course and repeat, repeat, REPEAT!!!

Just make sure that – with all the crazy comings and goings, food and wine aplenty – that you don’t lose track of time.

When it’s getting near to 12 o’clock, you need to grab your glass…

… you need to stop and find a seat. Or a ladder. Or a sofa. Something that is fairly high up off the ground to stand on…

Switch on the telly or radio and turn it up LOUD. Because the first chimes of the clock from Copenhagen’s rådhus (townhall) are your cue to literally ‘jump’ into the New Year. As you will probably take off your shoes, make sure that tonight you aren’t wearing your holy socks or your stockings!

So we jump down, hug and kiss everyone in the room and open (yet more) champagne. And sing along with the choir on the telly…

And then it’s time for everyone to muffle up, pile outside (safety glasses on, champagne in hand) for the Grand Finale of fireworks. Even if you do end up looking like Bono! 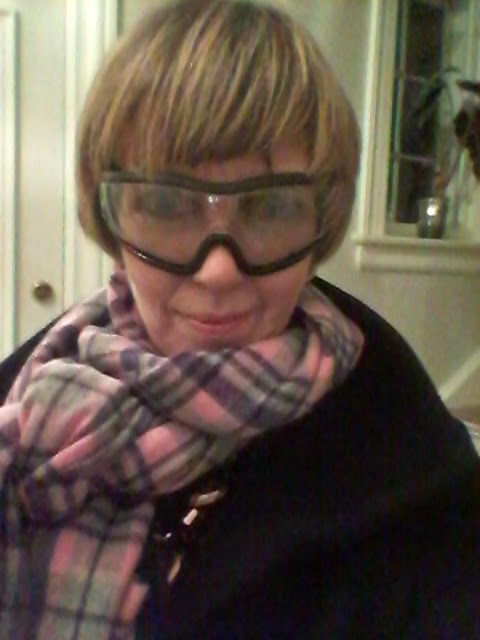 Remember, safety first! In one of my favourite satire shows Tjek på traditionerne, they have a fun saying of “after lighting fireworks, take one step back for every bottle of wine you have ingested”! Ha! 😉

Where we live, the fireworks usually last for over 30 minutes. But you’ll hear fireworks going off the whole night, into the wee small hours of the morning… And again the next day!

Here’s a snippet from just ‘one’ of our fireworks! You can imagine what it’s like with them going off left, right and centre for an hour or two…

But back to our party!  After the fireworks, you can come back in and warm up with hot coffee and kransekagetop (yummy marcipan cake, baked in rings, layered up and decorated with sparklers, feathers and streamers) before finishing off the champers. Last year, I’ve attempted to bake and build my own kransekagetop…

…I was pretty pleased with the end result! (There were Italian visitors present last year, hence the extra flags…)

But what about the Day After – when we all wake up late on the first of January? Well, that means a day of watching German ski jump on the tv, eating lots of junk food and [sigh] clearing up the aftermath of fireworks from the road and garden… Yes, sir, yes, sir, three bags full!

All that’s left for me to do, dear readers, is thank you for bearing with me. Godt Nytår!  Happy New Year!