Welcome, once again, to my Danish Christmas Advent Calendar! Every day I’ll be giving you a little peak into how our family celebrates Christmas here in Copenhagen.Do the Danes love Christmas? Um, yes – they even use the word Christmas as a verb… Vi juler! (We are ‘christmasing’!)

So get comfy, put your feet up, grab a cup of something warm, and prepare for an avalanche of hygge!

Admittedly not one of my personal favourite parts of a Danish Christmas – most of those elves give me the heebie geebies!

You’ll also find nisser in Danish schools.  Both my kids (DearSon,15 and DearDaughter,13) are playing nissevenner (“elf friends”, the equivalent of ‘Secret Santa’) where they hide several small gifts for a classmate.  The names are drawn at random, and the general rule is around 3 or 4 gifts costing a maximum total of DKR 75 (USD12 or UK£8).

But not all nisser are nice!  There are also drillenisser (“teasing elves”, naughty elves) about!  Often it’s Mum and Dad to pre-school kids who pretend to be Drillenissen.   And just what do those drillenisser get up to?  Well, you might wake up in the morning and find that they’ve put grød (porridge), nuts or newspaper in your shoes.  Or turned your coat, hat and gloves inside out.  Or put Nutella on top of your toothbrush.  Wrapped the door handles in toilet paper.  Can’t find your socks?  Hmm, take a look in the fridge!  Phew…it’s hard work playing a new trick every single day in December!

Anyway, love them or hate them, you just can’t get away from them.  They’re everywhere – even hanging around at the school dentist (along with their giant toothbrushes).

I’m not quite sure whether the dental assistants love or hate nisser.  They had a jar full ofsyltede nisserumper (“pickled elf bottoms”!) on the reception desk…

Anyway, would you like to make your own big, nosy nisse, that’s easy peasy to do and won’t take more than 10 minutes? This is one we made…

Similar versions can be bought – at a price – in the shops… 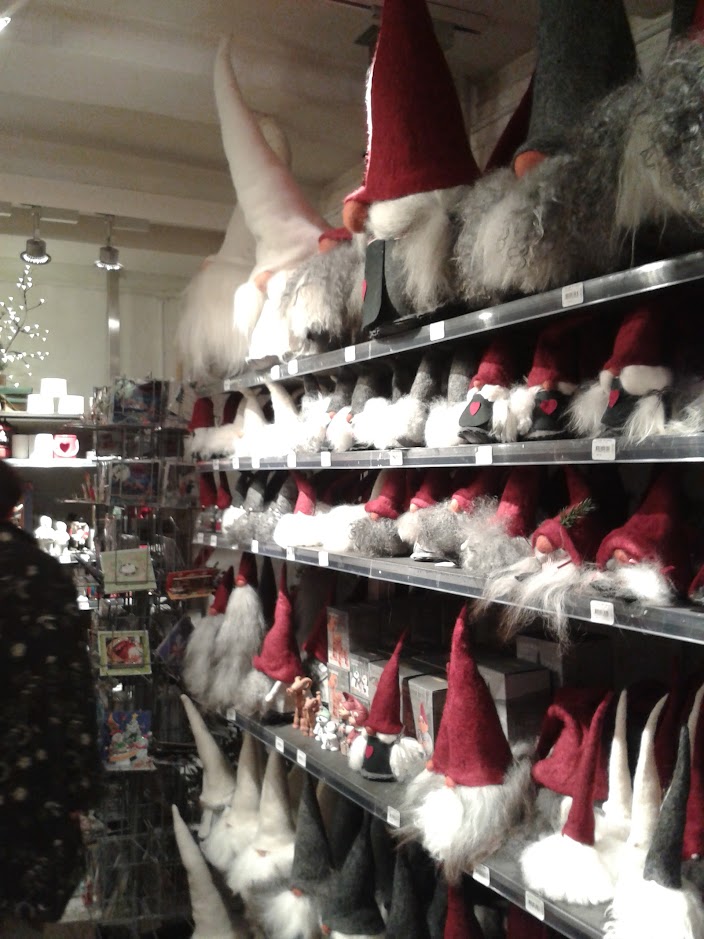 Cut out a ‘hat’ for your elf from the felt. Don’t worry too much, a rough triangle will do. Fold it over and sew it down one edge. Then turn it inside out, so the stitches don’t show, using a pencil to help you get right into the little pointy top.

Put a bit of the stuffing inside the hat (this will also help it to stand upright).  Stick on a large wooden bead for his ‘nose’, just under the brim of the hat.  The hot glue gun is great for this, no hanging around.

Then take more of the stuffing and pull it to bits, so you end up with a pile of smaller pieces.  Use this to make his beard and stick that on underneath the hat/nose.

And while you get on with making your very own nisse, have a listen to a famous song about them.  Yep, you can’t beat a bit of John Mogensen – he’s a cult classic!

What’s going on with all those rats?  Well, they were hoping to eat the porridge but the elf threatens to set the cat on them…

Here are the lyrics in Danish:

…and a very rough English translation:

But elf-daddy he threatens with his big spoon,
“Won’t you just run away now,
because I want my Christmas porridge in peace and quietsy,
and no one, no one will I share it with.”
But the rats they hop, and they dance,
and they swing their hips,
they look at the porridge, and they stop,
and they stand around the elf, closely packed in a ring.

But elf-daddy he is a little angry cork,
and with his body he makes a jump:
“I will fetch the cat, if you don’t stop,
when the cat comes, it will be stopped.”
And then all of the rats get so scared,
oh so scared, oh so scared,
they turn around and dance a couple of times,
and one, two, three, then they are gone!

Keep an eye on those crazy Danish nisser (and rats)!