Ten unforgettable concerts. Gosh, where do I start? Have seen more rock concerts than I can shake a really big stick at. Grew up with punk, then new wave, new romantics, ska, etc, etc and these days I’m listening to rock and electronica. Have resisted the urge to go look at the Edinburgh Gig Archive because I’ll be sucked in – once again – to that fabulous time machine… 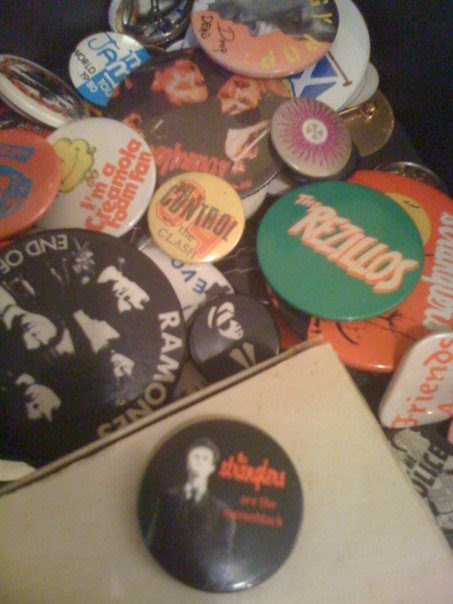 So here’s the ‘official’ top 10 list. Due to having given birth twice, I’m a bit hazy about some of the dates. And, as so often happens with these ‘from the hip’ blogposts, will no doubt think of 10 more concerts as soon as I hit the ‘publish post’ button! 😉

My first ever concert. Little did I know back then that the support, Joy Division (lead by Ian Curtis, who hanged himself months later), would be iconic in music history. Only thing I remember about the Joy Division part of the evening was that Ian Curtis was a weird dancer. And not a happy chappy.

My Dad was annoyed when he discovered, on dropping us off, that the concert didn’t start until 10pm (my friend Gillian and I were schoolkids) and that he would have to come and collect us at midnight on a schoolnight 🙂 Most memorable today because the lead singer was Charlie Higson, now a well-known comedian (“The Fast Show” and “Swiss Toni“).

You would think that a group who stand stock-still for most of the time would be boring. Not.

KID CREOLE AND THE COCONUTS, Edinburgh, 1983

Found out just before the concert that they were splitting up and this would be their ‘Farewell’ tour. (Though they, of course, reformed and toured again…)  My pals and I cried after the show (ah, we were so young!) because it had been so fantastic and went for a hot chocolate at a café on Leith Walk afterwards. Memories 😉

Saw them a few times. The last time I saw them I knew that punk/new wave was finally dead because Joe Strummer told the audience to stop spitting on them, or they would leave the stage 😉

I’ve seen Elvis Costello more times than I can remember. First saw him in the late 70s. If I look at my (alphabetically organised) CD collection, he fills a very large space. Hard to choose but will say Falconer, Copenhagen, 200?. Stage crew started packing up and he kept on singing for us acapella. My fave song is Pump It Up and I still love him – please watch the video, those legs are fantastic 😉

Where do I start? Everyone needs to experience Matt Bellamy live. As I’ve said before, a few days after the Muse concert a religious group came a-knocking and asked if I had a God. Was sorely tempted to reply, “Yes, and his name is Matthew Bellamy”, but very much doubt they would see the funny side.

Wasn’t expecting much more than a nice trip down memory lane (I saw the Stranglers 7 or 8 times in the 1980s) but was completely blown away. Especially by Baz Warne, their new singer. Even DH was impressed and said that he would like to come back in another life as Baz Warne. I’d like him to do that too… ;D

Can’t make this list without mentioning my sweetie friend, Rasmus, who twilights as guitarist in Denmark’s finest rock band Magtens Korridorer (which translates as The Corridors of Power). Always a fantastic atmosphere at their concerts – like being out partying with friends (including the beer and the singalong part). And, yes, we always buy our own tickets for the concerts. And, yes, we get to go to the After Parties – though I haven’t seen that free beer they keep promising me yet… 😉

Happy Friday! Hope you get a chance to enjoy some live music soon 🙂